Simplicity 2743 is the latest thing off my machine.  I actually had this project cut out before we moved from West Virginia.  Lucky for me pattern sizes run big.  I chose a very boy-ish sweatshirt fabric covered in skulls for the vest.  Alex can be kind of tough to please.  Sometimes he loves the things I make and sometimes I have to chase him running and screaming to even get a picture.  He wasn't with me when I bought this fabric, but he loved it when I had him try the vest on.  He's also really excited about the next project I have for him, but more on that later.

Here is the vest: 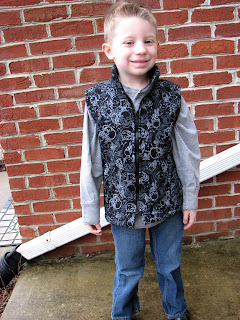 You can see that there is an issue with one side being longer than the other lengthwise.  Yesterday I thought about seam ripping and trying to fix it, but he was so excited to wear it I just let him go to school in it first.  The top edge and the separating zipper line up nicely so the only fix needed is to adjust the hem.  It has seam tape on the inside of the pockets, the armholes, and the collar so it looks nice on the inside as well.  It's another case of ninja pockets, but if you look closely you can see them.  They definitely blend in. 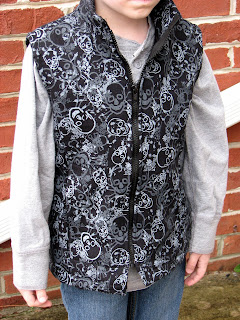 When I had bought the notions for this project I had mistakenly (drunkenly?  j/k) bought a regular zipper instead of a separating zipper.  I don't know how I made that mistake, but c'est la vie.  A few weeks ago I went and bought the 22" separating zipper called for.  It was huge!  For a regular zipper I would have probably just adjusted it, but with a separating zipper I would have had to gotten all frustrated with the needle-nose pliers.  I was feeling lazy so I went out to see what more appropriate size I could find.  I was hoping for an 18", but I only found a 16".  I think, if you disregard my mistake with the hem, that 16" worked in this case.

I know I haven't updated in a while so I want to include some (badly taken) photos of some projects I have finished since my last update.

Here is an outfit for a friend's little girl from an out of print Simplicity 5374: 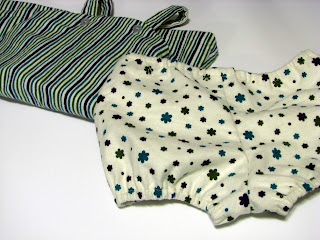 I had purchased the pattern and fabric when my now five year old was a toddler.  When I was unpacking I found the pieces already cut out so I completed it for my friend's daughter who was of the approximate age.  My friend lives in another state so I could not adjust the straps correctly.  I'm not positive I would make the jumper again because I don't like the way the straps come together and I really don't like putting buttons on kids clothes (I kept panicking and redoing them over and over).  If I made it again I would do faux buttons and probably Velcro or snaps.  I did really like the bloomers.  It was a bit of challenge trying to pull elastic through an edge so tiny, but other than that I really liked them.

I also made Halloween costumes.  My son was Woody from Toy Story.  I bought the hat, the t-shirt and the bandanna.  I used fabric paint to do the plaid on the shirt.  I used Butterick 3244 View B for the vest and View C for the boots and belt.  I omitted the fringe on the vest and just left the fabric whole.  It ended up being too short and I had to add another piece at the bottom.  Alex was pretty tickled with the costume. 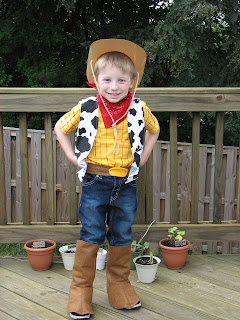 My husband and I wanted to kind of match with our son so we did Simplicity 2172 and Simplicity 4083 (View C).  We were in a time crunch because I was making them as we were preparing to go to Walt Disney World so I skimped on the buttons and do-dads.  I have them so next time we want to wear the costumes I can add them, but for this occasion Velcro was our friend. 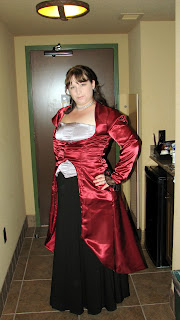 That was probably not the best pose for me to do.  I cut the jacket too small and it really shows here.  I was too tired/lazy to add the accent around the neckline (again, I have it in case I want to add it).  It's Velcro-ed closed.  The skirt was bought because I could not get my skirt to fit together.  Something went wrong somewhere and the pieces just weren't matching up.  The part I really loved about this pattern was the corset.  I LOVE that corset.  It was a lot of pieces and a lot of work, but it looks fabulous.  If I could figure out a way to work them into my daily wardrobe I would make like 20 of them. 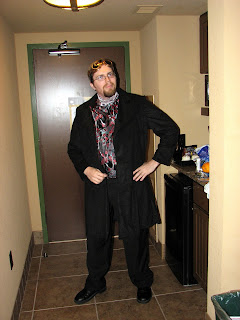 Here you can see that my husband is a nut.  And his costume.  Those are his own pants and bought goggles, but I made the dickey, the vest, and the jacket.  He really really liked them.  He was very proud of my sewing abilities and he had a really great time wearing it.  His costume was cut correctly (hint of jealousy on this end) and he wore it well.  He's a sexy beast anyway so I knew he'd look great.

Now looking forward to the future projects.  It's still cold here in VA and it's supposed to stay that way for a while.  It seems to me like it took a long time to get cold so I'm hoping it will hold out.  Next project I'm thinking of tackling is one of these two:

A fleece jackets for all of us. Or: 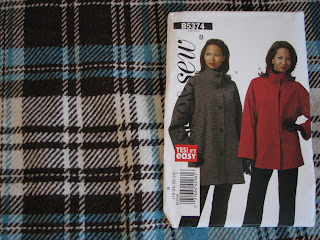 Just a simple yet kind of fancy coat for myself.