The costumes are finished (kinda).  They were three costumes and four items.  It was almost like a sewing bootcamp for me.  I'm so very glad they are finished.  I was stressing about it something fierce.

Prior to this year I really only sewed a few things a year and took my sweet time on them.  Summer is a hard time for me to work on sewing because even though my son isn't in school there are a lot of things we like to go out and do.  It also doesn't help that we aren't really on any schedule during the summer months.  These costumes needed to be completed by this Friday (Sept 10) because we were leaving to go to Walt Disney World for two weeks including Mickey's Not So Scary Halloween Party.  We went last year as a family of pirates (bought costumes) and had a great time so we really wanted to go again.  Next year I think we will actually go in October though so I have a little bit longer to work on costumes.

For my son I used pattern Butterick 3244 for the astronaut (View C) to make Buzz Lightyear. 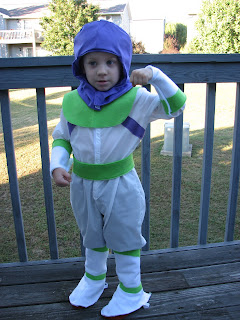 It's not exact, but I did study dear old Buzz trying to get it the best that I could.  I will be adding some embellishment to his bib...eventually.  The boots, the cuffs, the belt, and the bands are made of felt.  The hood was supposed to be as well, but I made it out of broadcloth (like the jumpsuit) because I just don't think felt on your head is a good idea in Florida.  I made a 4T for my son who turned 4 last May and is in the 50th percentile for height and weight.  I really proud of it and I was pleased to see that Alex loves it too.

For myself I decided to go as Red Riding Hood.  For the cape I used Simplicity 5840 and for the dress I used McCall's 4948.  The cape was featured previously, but here is the whole effect... 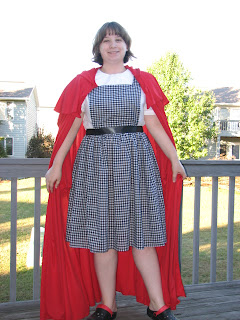 And just the dress... 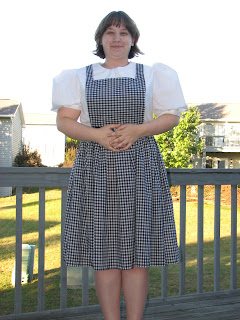 It's a little big because in my rush to finish I decided this wasn't going to be the first pattern alteration I made.  This was only my second zipper and I hate them with a fiery passion.  It looks fine though.  Especially since no one is going to see the back since I will be wearing the cape.  I was going to hem the cape to a length closer to the dress, but decided the longer length would work fine.  I used Gingham for the apron and broadcloth for the sleeves and top (the same cloth I used for Buzz's jumpsuit).  Since I have a boy and I have never made myself a costume before these are The Girlest Sleeves I Have Ever Made.  Very puffy.  Cute though.

When I decided to do this costume the companies hadn't come out with their patterns for the Autumn yet.  Imagine my surprise and frustration at seeing McCall's 6187 which is a Red Riding Hood costume.

Lastly we have my husband the Jedi. 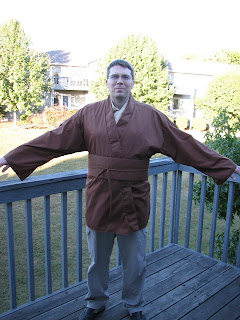 I didn't make him pants because I ran out of time.  I suppose I could run out to Joann Fabric and whip something up, but I'm not going to.  ;p  He and I agreed the pants don't matter as much as the top.

He's always wanted to be a Jedi.  Last year the plan was for him and Alex to be Jedi, but when I was shopping for fabric he had an opinion on what kind of fabric he wanted me to use.  This year he was not consulted and broadcloth was once again used.  I am a fan of broadcloth for costumes because it's what my own mother used every year.

I am extremely glad these are done, but kind of frustrated that they took me so long that I'm probably not going to make Alex another Disney shirt before we leave.  That's fine though, just means he will get to celebrate more when we get back.
Posted by Unknown at 4:39 PM