This is the first shirt I've made for our Disney trip in Sept (Simplicity 3856).


I had originally cut out the pieces last year before the move.  Then moving craziness ensued and it was lost in the shuffle.  Then it got shelved for other projects.  Finally I hunkered down to get it done and my concern that it's too small now was validated.  When I cut this shirt out I cut it for 3T.  I hoped it would run big and still fit when it was finished.  Not so much.  When I had him try it on I realized it was too small, but he can still wear it open with a tee underneath for the trip (I'm hoping). 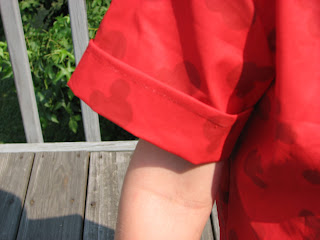 I really like these sleeves.  The little sewn in fold is adorable.  Unfortunately, this was the last pattern where I cut out the tissue included instead of tracing so I'm going to have to either trace and make adjustments myself or just wait till Simplicity is on sale at Jo-ann's again for 99 cents.

We now have 65 days till our Walt Disney World trip so I'm freaking out about our Halloween Costumes for the party.  I have them planned (Red Riding Hood for me, Jedi for Brian, and Buzz Lightyear for the little monkey), but now I have to actually make them.  Costumes really are my favorite thing to make so it will be fun, but I'm just paranoid I won't finish them in time or something equally disappointing will happen.

I wanted to let y'all know about a tip from the July 2010 Threads magazine that I'm loving right now.  With the Halloween costumes some of the pieces are bigger than the standard tissue paper I use to trace them.  Previously I just taped tissue together, but in the tips part of the issue they mentioned using plastic tablecloths on a roll like you use for catering.  I got mine at Sam's Club and it's perfect.  I used a black marker to trace and it doesn't bleed through.  So awesome.