Okay, so this blog hasn't been updated in a while.  The tiny little Tinkerbell below is now a rambunctious three year old.  She is a most definitely a force to be reckoned with.  A Tiny Tornado.  I have made her (and the rest of us) other things in the two years since I last blogged, but never found the time and energy to blog them.  Sometimes I didn't even take a picture.  Hopefully, this will be the re-start of regular sewing blogging again.

It's Jungle January!  I actually bought this fabric, I think, two years ago for my then one year old.  I was bound and determined to finally complete it for January.  This is Simplicity 1724, View D.  I did not do the applique.  The fabric had a lot going on and wanted the jungle hearts to stand on their own.  I do believe I saw a jungle heart at Joann Fabrics that matched, but that was two years ago. 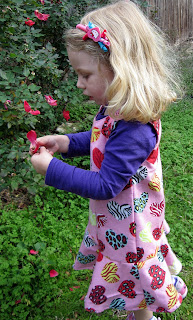 The pattern has two jumpers, C and D.  The view I chose, D, has more of a ruffle skirt.  Whereas C has a straight skirt.  I will definitely go back to this pattern again.  It was a quick cut and sew and I think it looks really nice on.

Mistakes:  (Because I always talk about them and obsess)  I, for some weird reason, cut a size 4 last week.  I don't remember what I was thinking because kids' patterns from the Big 4 always seem too big anyway.  I was worried it would look like she's drowning in it.  I actually think it looks okay and I'm actually glad that she will be able to wear this next year as well.  So, I guess it was a mistake, but I'm happy about it. :)

I also had a hard time with the button holes for this jumper.  I may have just been out of practice with making them.  I spent most of today ripping and re-doing the button holes.  As I was working on them I thought maybe next time I will just use large snaps and a button or flower instead. 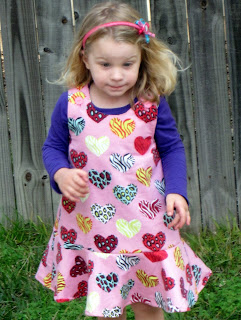 But, she likes it a lot and that makes it a success.
Posted by Unknown at 1:57 PM